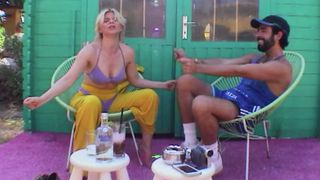 Robyn has graced us with an amazing video for her summer-soaked club banger “Between the Lines” off last year’s Honey album. The visual follows Robyn and her crew on a fun, fashion-filled weekend in Ibiza last summer. The Swedish pop icon dances around the party island in a neon yellow power suit with a purple bikini on top, swims in the ocean and her villa’s pool, sings while submerged in a hot-tub-turned-ball-pit, and finally makes a comeback to the stage during Radio 1’s Ibiza 2018 residency.

The lo-fi video is directed by SSION and has an ’80s feel thanks to the old-school 4:3 aspect ratio and lack of crisp editing. According to the accompanying press release, it was inspired by WHAM! 1983 video for “Club Tropicana.”

After wrapping up her U.S. headlining tour earlier this year, Robyn will embark on the European leg starting today in Munich, Germany. Once she completes the European summer festival circuit, she’ll finish with a homecoming show in Stockholm this August. Watch the fun video above.

Pharrell May Have Perjured Himself With His “Blurred Lines” Comments
MusicsponsoredDecember 8, 2019