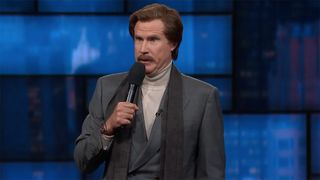 Ron Burgundy of the Anchorman franchise is one of Will Ferrell‘s more iconic movie characters. And while he’s already achieved just about all he can in the world of news broadcasting, now we find Burgundy making his stand-up comedy debut, as this week the scotch-drinking, flute-playing anchorman stopped by The Late Show with Stephen Colbert to tell a few jokes.

During his brief stand-up routine, Ferrell’s Ron Burgundy touched on how partying and smoking marijuana has changed over the years, while also discussing unusual names for cocktails. He also spoke on trading trade wars for peace, and the time he went to Ellis Island to trace his roots.

After his stand-up debut, Burgundy sat with Colbert to discuss his comedic experience. He also listed his favorite late night talk show hosts and recalled how he used to drink and play poker with the legendary Johnny Carson