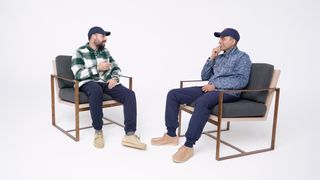 Tomorrow, Ronnie Fieg is releasing his new Clarks Wallabee collab, but prior to the drop, the designer sat down with one of his contemporaries in Angelo Baque, founder of Awake New York, to discuss the history of the shoe.

Fieg and Baque delve into how the Wallabee captivated them early on, then detailing hip-hop and the music industry’s influence on the silhouette, specifically referencing Wu-Tang Clan and Biggie Smalls, among others. From there, the two transition to the difficulties surrounding individual style in the internet era, as well as the future of the fashion industry in general.

To hear Ronnie and Angelo’s thoughts on the iconic Clarks Wallabee and the current state of fashion, press play above. Again, Fieg is dropping his Wallabee collab at all KITH shops tomorrow, November 9.

Sat down with my good friend and fellow Queens native @angelobaque to discuss the history and significance of the Clarks Wallabee, as well as the future of this industry and passing the torch to the next generation. Full video via link in bio.

Up next, take a look at KITH and Greg Lauren’s dystopian-inspired ivy league collection.

15 Drops
The 15 Best Products to Drop This Week & Where to Buy Them
SelectssponsoredJuly 21, 2019