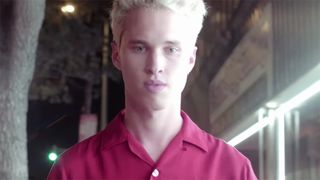 Rising vocalist and songwriter Ryan Beatty today shares the official music video for “Pink Floyd,” taken from his debut album Boy in Jeans, which released in July. The dream-like aesthetic finds Beatty out for an evening stroll as he bumps into a passerby.

“Pink Floyd” joins Ryan’s previous visual releases from Boy in Jeans, including “Haircut,” “Powerslide,” “Camo,” “Bruise,” “Euro,” and “Crash.” You can watch the clips, as well as stream the album, underneath. The 22-year-old musician lists Solange, Frank Ocean, Björk, ELO, Lauryn Hill, and Stevie Wonder among his Boy in Jeans influences.

For more, we recently sat down with Beatty to discuss his debut album and working with BROCKHAMPTON.

Next, watch N.E.R.D perform “Lemon” with BROCKHAMPTON at Reading Festival.