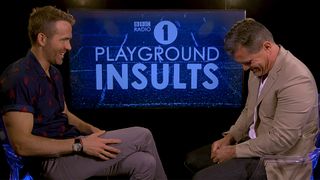 With Deadpool 2 hitting theaters around Europe this week, Ryan Reynolds and Josh Brolin went on BBC Radio 1 in the UK to fling shade at one another, with pretty hilarious results.

Hosted by Scott Mills, the aim of the game is to make your opponent crack up by ripping them with dumb playground insults. So as you’re whacked over the head with lines such as, “Josh, you are a muffin-smuggling pirate-puncher,” you’ve got to keep a straight face.

Muffin-smuggling aside, the creative quips the pair shoot at each other get progressively funnier — and, of course, shadier, like when Brolin — who plays Cable in the movie and Thanos in Avengers: Infinity War — starts throwing shade at Reynold’s biggest career fail: Green Lantern. Ouch.

Do you love Reynolds and Brolin’s bromance? Let us know in the comments.

Next up, this is the joke Donald Glover wrote for ‘Black Panther’.