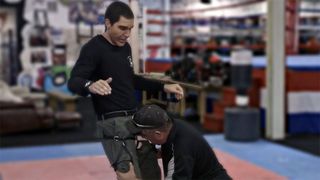 After tricking GOP state representative Jason Spencer to pull his pants down and yell racial slurs, to scanning former GOP Senate candidate Roy Moore with a “pedophile detector,” and then talking golden showers and oral sex with close ally of Trump, Joe Arpaio — Sacha Baron Cohen is back at it again, this time fooling the leader of a pro-gun group in his latest episode of Who is America?

Putting the spotlight on Dan Roberts, the president of Youth Shooters of America, an organization that promotes youth shooting sports, Sacha Baron Cohen portraying Erran Morad, an Israeli antiterrorism expert, tricks Roberts into putting a sex toy in his mouth as part of a fake defense strategy to survive beheadings.

In the short clip above, Cohen asks Roberts if the organization is for “shooting youth for sport” and then describes the benefits of arming children, by recalling a story.

As part of the training session, Cohen first teaches Roberts how to identify baby suicide bombers hiding explosives in their diapers. Then, during the beheading portion, Cohen holds up a sword and instructs Roberts to “identify the target” and “attack,” as he wears a strap-on to represent the attacker’s penis.

Roberts eventually bites the sex toy, before yelling “nobody move, drop your weapons” along with additional instructions.

Enjoy the hilarious video above, then after, revisit other installments of Who Is America? below.

In other news, Donald Trump thanks Kanye West for his “support” on ‘Kimmel.’

Black Lives Matter
Why Police Unions Have So Much Power In America
LifestylesponsoredJune 9, 2020

What We Learned Visiting One of America’s Biggest Landfills
DesignsponsoredMarch 4, 2020
Follow
Highsnobiety Life
What To Read Next
Load More
Search Results
Load More