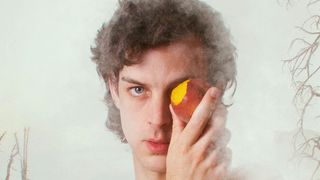 The allure of Call Me By Your Name has yet to expire in 2019. The infamous peach scene is still fresh in many of our minds, refusing to fade as time quickly passes. Even though 2017 was inarguably the year of the peach, the fruit has not peaked in terms of cultural relevance. In fact, it’s the centerpiece of SAKIMA‘s forthcoming mixtape which is appropriately titled Project Peach. He acknowledges the peach’s “connotations within the gay community as slang for ass,” but uses its name in reference to an ancient Chinese tale about the “‘bite from the forbidden peach’ as a way of saying homosexual” to serve as an extension of the facets in which his music explores and expresses queer life, sex, and culture.

Today, we’re premiering the video for his juicy new single “Pity Party.” In an email, the English singer-songwriter explained how the track “explores the different dimensions of the straight male ego” based on interactions from the queer point of view and delves into the “sense of separation” that stems from insecurities on both sides of the spectrum. This concept comes to life in the intimate visual, the camera spinning around SAKIMA as he contorts his limbs while basking in the glow of dim lights in his own company.

“It’s hard to explain those experiences without painting with too broad a brush, but within music people can automatically understand the emotional nonlinearity a lot easier,” SAKIMA adds. “So that’s why the song starts with a sexualized and objectified perspective but shifts gears throughout to being angry, frustrated, befriended even short moments of joy, but all with a sense of tension and underlying darkness that can often exist within the social relationship between straight men and queer people.”

Project Peach is slated to drop on August 16. Watch SAKIMA beautifully shed some tears in the video above.