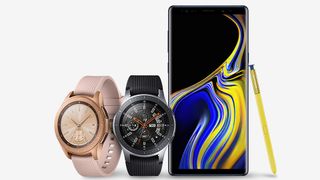 Samsung held its 2018 Galaxy Unpacked event today, officially unveiling multiple products, while also teasing others. Headlining the festivities was the introduction of the Galaxy Note9, followed by the company’s new LTE Galaxy Watch and the Galaxy Home smart speaker. In addition, Samsung debuted its Wireless Charger Duo and made a special announcement regarding Fortnite for Android.

To see what you may have missed, or to simply gain more info, continue reading below. Also, you can watch the event in-full above.

Samsung’s Galaxy Note9, optioned in Ocean Blue and Lavender Purple, is highlighted by all day performance, a new S Pen with connectivity, and the company’s most intelligent camera ever. Available in 128GB and 512GB variations, with a microSD card insert, the smartphone boasts a 4,000mAh battery and 10nm processor, supporting speeds up to 1.2 gigabits per second.

With the new and improved S Pen, you can take selfies and group pictures, present slides, control music, and more. The accessory comes with Bluetooth Low-Energy (BLE) support, then charging in the Note9 in less than a minute.

The camera for the Note9 has scene optimizer, flaw detection, advanced noise reduction technology, and a Dual Aperture lens, while optimizing saturation, white balance, brightness, and contrast, all based on elements of each photo. It also alerts you when a specific image is flawed, allowing you to take another picture right away.

The Galaxy Note9’s 6.4-inch Super AMOLED Infinity Display is the largest edge-to-edge display ever on a Note. It is complemented by stereo speakers, capable of supporting Dolby Atmos.

Follow here for more information on the Galaxy Note9.

The watch then comes with a “daily briefing” feature, allowing you to sync your calendar and show appointments on-screen. You’ll also be able to purchase a variety of bands and choose from over 60,000 faces.

Lasting several days on a single charge, Samsung’s Galaxy Watch arrives in 42 mm and 46 mm sizes — in Rose Gold, Silver, and Midnight Black — retailing for $329.99 and $349.99, respectively. A release is scheduled for August 24.

Follow here for more information on the Galaxy Watch.

The Galaxy Home smart speaker is Samsung’s response to Apple’s HomePod, among other similar devices such as the Amazon Echo. While the company has yet to fully introduce the speaker, today they partially unveiled the upcoming release.

Wrapped in fabric, the speaker rests atop three metal legs, then featuring function buttons on the smooth surface. It also boasts six built-in speakers and a subwoofer, providing listeners with surround sound audio.

Eight far-field microphones are designed to detect voice commands, allowing you to utilize Samsung’s Bixby assistant. You can instruct Bixby to play music or complete various other tasks, similar to how Bixby is used on Samsung phones.

For now, this is all Samsung has revealed about its Galaxy Home speaker, but expect additional details to arrive in the coming months.

Samsung’s Wireless Charger Duo charges your phone and smartwatch simultaneously. Being a universal Qi standard charger, you can also power two phones at once, not limited to Samsung Galaxy devices. They simply must be compatible with wireless charging.

The accessory features two wireless fast charging lanes — up to 7.5 watts each — one with a stand and the other a flat surface. Complete with built-in fans, the Wireless Charger Duo is powered via a USB-C port.

Initially available in black, Samsung’s Wireless Charger Duo is slated to retail for $120.

Follow here for more on the Fortnite exclusives available to Galaxy owners.