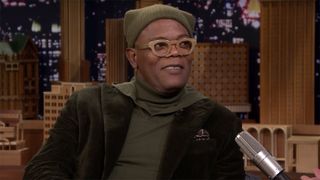 M. Night Shyamalan’s much-anticipated new film, Glass, lands in theaters this week, so the cast is currently making their rounds in promotion of the movie. Last night one of the stars of the film, Samuel L. Jackson, stopped by The Tonight Show Starring Jimmy Fallon to discuss the project, as well as other topics.

After Jackson dishes on his intriguing friendship with none other than Judge Judy, Fallon asks the 70-year-old actor to name his favorite movie characters that he’s played. While sifting through his 100-plus roles, Sam then counts down his top characters.

We don’t want to give too much away, so you’ll have to press play above to hear Jackson detailing his favorite roles. After watching, hit the comments with your favorite Samuel L. Jackson characters.