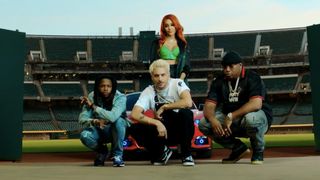 Last week Zane Lowe premiered Saweetie‘s new single, “Up Now,” as his World Record. Now, the 25-year-old California rapper returns with the official music video for the tune, co-starring the song’s collaborators in G-Eazy, Rich the Kid, and London On Da Track.

Adhering to the overall sound of the song, Saweetie decided to take to the Bay for the aesthetic, hitting up Oakland Coliseum where the Athletics play. To further complement, we see a cameo from Bay Area royalty, E-40.

“Up Now” is slated to appear on Saweetie’s full-length debut, coming soon.