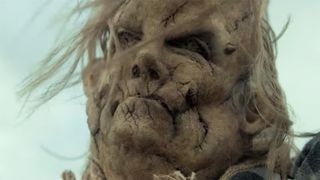 As we are nearing the summer premiere, CBS Films shares the first full-length trailer for Scary Stories to Tell in the Dark, Guillermo del Toro and André Øvredal’s anticipated adaptation of the iconic horror book series of the same name. The movie follows a group of local kids as they attempt to keep a collection of frightening stories from taking place in real life.

Scary Stories to Tell in the Dark is set in the small town of Mill Valley in 1968 America. Located in the infamous Bellows mansion is a book of scary stories based on the tortured life of the young girl who wrote them. When a gang of teenagers finds the book in the girl’s home, the stories somehow begin to come to life.

You don’t read the book, the book reads you. The official trailer for Scary Stories To Tell In The Dark is here, from the dark minds of Academy Award winner Guillermo del Toro (@realgdt) & acclaimed director André Øvredal (@filmtroll). In theaters August 9. #ScaryStoriesMovie pic.twitter.com/GHw105Q2Cc

The First ‘Scary Stories to Tell in the Dark’ Trailer Brings Your Childhood Fears to Life
MoviessponsoredMarch 29, 2019

Ava DuVernay Tells the Story of the Central Park Five in Netflix Series ‘When They See Us’
MoviessponsoredMarch 1, 2019
What To Read Next
Load More
Search Results
Load More