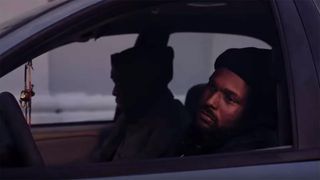 ScHoolboy Q continues to share videos in support of his most recent album, CrasH Talk, which released back in April. Following clips for “Floating” with 21 Savage, “Chopstix” with Travis Scott, and “Numb Numb Juice” starring Tyler, the Creator, the TDE rapper returns with the official visual for “Dangerous” featuring Kid Cudi.

Unfortunately, Cudi isn’t present in the Alexandre Moors-directed aesthetic, which shows Q executing a hit, before he ultimately gets gunned down himself. The video adheres to a theme of revenge, featuring the familiar quote, “An eye for an eye leaves the whole world blind.”

Press play above to check it out, then you can revisit ScHoolboy’s other CrasH Talk visuals, as well as the album, underneath.