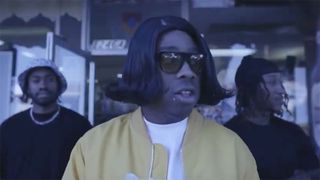 Hours after releasing his first solo single in three years, ScHoolboy Q is officially back with a video “Numb Numb Juice.”. The short but entertaining clip includes an appearance by Tyler, the Creator who recreates a scene from Hype Williams’ 1998 film Belly.

Hopefully this means that a new full-length album is on the way from the TDE rapper. His last record Blank Face LP dropped in 2016. Nonetheless, watch the video above and check back with us for more updates on ScHoolboy Q.

ScHoolboy Q Takes You on a Tour of LA in His Stop-Motion “Floating” Video
MusicsponsoredMay 15, 2019