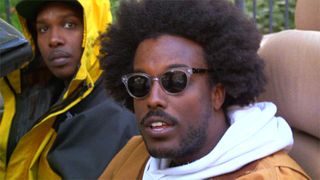 In 2019, there’s no shortage of rap songs that slap. Rarer though, are tracks that transport you beyond your immediate surroundings to an oasis of sorts. “Osiris” by Senay is certainly one of those; his flows, the most peaceful stream to ever exist, the synths courtesy of Steven Julien (aka Funkineven) and Byron the Aquarius, so serene they could calm the least chill person in the room.

Aside from the song itself, the visuals will also linger in your brain. Director Mighty Baron III envisions “water, hills, greenery, an altogether openness sense of space” when listening to “Osiris,” so he translated that into a rap video with the intention of “showing another side to London that people don’t usually see.”

Adding some extra context to his already smooth-tongued lyrics, Senay himself puts the journey to “Osiris” like so:

“Me and Stevie linking up at the Hackney Carnival was divine – two titans put in play to build with one another. I heard the record on the Apron [Records] show he does on NTS and knew it was calling to me. Now a full album is on its way. Here we are, hip-hop heads in the afterlife being reborn just like the ancestor Osiris. These devils think they can cut us up into small pieces and split up the sauce but the journey home can never be stopped. This odd obsession with genre now makes it stressful for some to pivot (with regards to hip-hop and electronic music as a whole) but the real heads know what the foundation is.”

Senay’s “Osiris” is out now on Apron Records.