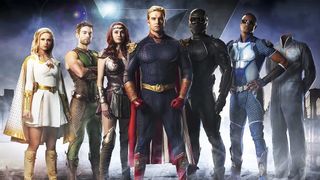 Seth Rogen and Evan Goldberg, aka the dream team behind projects such as Sausage Party and Preacher, have dropped the teaser for their next TV venture. Posted during New York Comic Con this weekend, the trailer is for a show called The Boys and is based on a comic book series of the same name. Watch the teaser above.

The series takes place in a world where superheroes become corrupted and embrace the darker side of their celebrity. It centers around “The Boys,” a vigilante group trying to bring the corrupt superheroes known as “The Seven” to justice. You could think of it as a “here’s all the fucked-up things that could happen if the Avengers were absolute douchebags” cautionary tale.

The comics were penned by Garth Ennis, the author behind Preacher, so anyone looking to get a clearer idea of how mad the series could potentially be can see Rogen and Goldberg’s previous TV project for reference.

The Boys will debut on Amazon’s Prime Video in 2019. More information to follow.