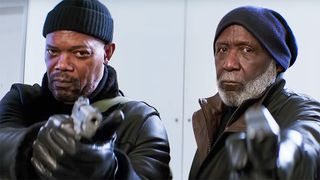 The first trailer for the Samuel L. Jackson-fronted Shaft reboot arrived yesterday and, as the official movie tag line warns, it delivers more Shaft than you can handle. Watch above.

It’s been 19 years since the last Shaft film landed in theaters with this latest addition serving as the fifth in the franchise. The narrative will see the three generations attempting to put aside their differences in order to discover the truth behind a friend’s untimely death.

Shaft is directed by Tim Story (Ride Along), co-stars Method Man and Regina Hall (Girls Trip), and is slated to arrive in theaters June 14.

Jonah Hill Swears More Than Any Other Actor in Film History
MoviessponsoredMay 14, 2020
What To Read Next
Load More
Search Results
Load More