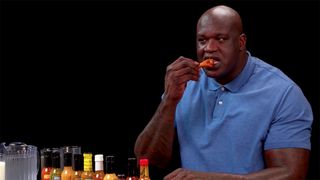 This week’s guest on Hot Ones is none other than four-time NBA champion, Shaquille O’Neal. Admittedly, Shaq does not do well with spicy food, but here he attempts to redeem himself from an embarrassing Paqui Carolina Reaper chip challenge.

With a gallon of milk in-hand, Shaq does his best not to make a face while going from wing to wing. All the while, the former pro athlete dishes on his relationship with Kobe Bryant, his infamous rap deal, and how he once blew $1 million in less than an hour. Shaq also reveals that somehow he couldn’t even dunk until his senior year of high school and that he missed out on the opportunity to sign NSYNC and Backstreet Boys.

Now a deputy, you can supposedly look forward to O’Neal running for sheriff in 2024. Beforehand, though, press play above to see how Shaq fares with the Hot Ones spicy wings challenge.

This might be the greatest photo of all time. 😂😂😂 Click our LINK IN BIO to watch the new episode of #HotOnes.