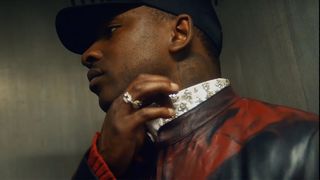 Skepta has cemented himself as a global emblem of UK’s Grime scene. A month after dropping his fifth studio album Ignorance Is Bliss, he’s showing big love to his fellow Grime MCs in the new visuals for his hit song “Love Me Not” featuring Cheb Rabi and B Live, which samples Sophie Ellis-Bextor’s “Murder On The Dancefloor.”

The track deals with complicated modern love and opens with a phone call from Skepta’s love interest; “I’m sick of you and I’m sick of your lies,” she says before hanging up. Over the skittering garage beat, Skepta lays out his stance on love.

The visuals welcome us into a low-lit house party, where some of UK’s biggest names make cameo appearances, including MC Bushkin and Mighty Moe from Heartless Crew, Octavian, Chip, Frisco, and Slowthai. It’s a house party with an enviable guest list and we fully get Skep when he asks “Who’s not feeling us?” Watch the star-studded video above.

Lana Del Rey Drops Video for “The Greatest” & “Fuck It, I Love You”
MusicsponsoredAugust 22, 2019