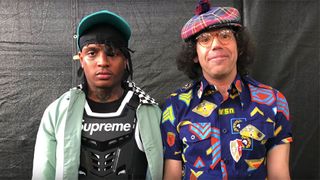 After Lil Pump earlier this week, Ski Mask the Slump God is the next musician to have the honor of being interviewed by living legend Nardwuar, the Human Serviette. Catching up backstage at Vancouver’s Breakout Music Festival, the duo went deep into the Florida rapper’s past.

Like Lil Pump, the Slump God also talked about getting kicked out of school to Nardwuar, as well as a chance encounter with Nas in a bathroom, how he got to work with Timbaland, and his love for Missy Elliott. Peep the video above for the full interview. Both Lil Pump and Ski Mask the Slump God were announced as members of the 2018 XXL Freshman Class this week.

In other music news, Kanye West revealed the tracklist for Nas’ upcoming album. Check it out right here.

Mark Ronson Talks Drinking Out of Grammys at House Parties Ahead of Parklife Festival
MusicsponsoredMay 31, 2019

BAPE Just Made It Easier to Keep Your Coronavirus Face Mask Clean
DesignsponsoredMay 22, 2020

How to Wear a Face Mask as Well as Tom Hardy
SelectssponsoredMay 15, 2020
Follow
Highsnobiety Music
What To Read Next
Load More
Search Results
Load More