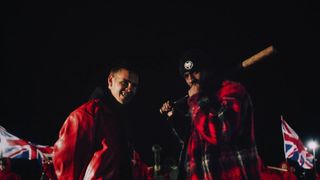 Not too long ago, slowthai dropped a very British visual for the title track of his debut album which drops tomorrow. Today, he’s shared a music video for “Inglorious” featuring Skepta and it follows in line with the whole theme as expected.

This time around, slowthai is seen being tortured by a group of government officials. Seconds before he’s about to lose it all, Skepta comes in on a camouflage tank to save the day with support from a unit of hooded soldiers. Nothing Great About Britain is officially out everywhere on May 17. Watch all the antics go down in the video above.