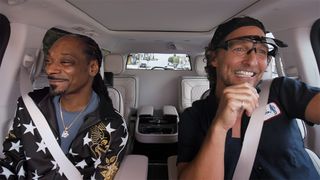 It'd be a lot cooler if you did.

Watch the episode for free on your @AppleTV app! https://t.co/nibMfRgN8A pic.twitter.com/zEwOXHPf7j

Before stopping by Carl’s Jr. to get their fast food fix, Snoop and McConaughey belt out some of the legendary rapper’s biggest hits in “Gin and Juice” and “Drop It Like It’s Hot.” To complement, the pals also throw down on some Willie Nelson and Kiss.

For a preview of Snoop Dogg and Matthew McConaughey’s Carpool Karaoke episode, press play above, then head here to watch the entire installment. Also, don’t forget, The Beach Bum lands in theaters March 29.

Snoop Dogg Is Releasing His Own Wine
MusicsponsoredApril 18, 2020