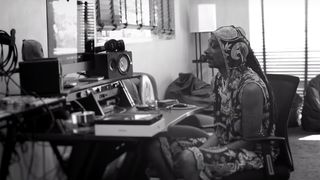 Snoop Dogg is the latest artist to put his own twist on Nick Cave & the Bad Seeds’ “Red Right Hand.” The 1994 record serves as the recognisable theme song for the BBC One show Peaky Blinders.

In a video for BBC, Snoop dons a flat cap like the one worn by the show’s British gangsters and protagonist, Thomas Shelby. He introduces the cover saying “By the order of the Peaky Blinders, this is ‘Red Right Hand’ by Snoop Shelby.” The clip shows black and white footage of Snoop recording and performing the song — and of course smoking up — interlaced with footage from the show.

Snoop Dogg quirkily delivers laid-back amusing lines about the show in what almost seems like a freestyle. Watch Snoop jam to his parodic cover above.

Watch Pharrell Bring Out JAY-Z, Tyler, the Creator, Snoop Dogg & More at Something in the Water
MusicsponsoredApril 28, 2019

Work From Home
The Best Musician Live-Stream Concerts (So Far) to Rewatch in Self-Isolation
MusicsponsoredMarch 25, 2020