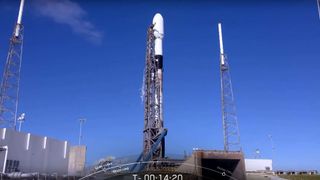 Elon Musk’s SpaceX has sent its second batch of Starlink satellites into orbit as part of its plan to blanket the earth in a network of up to 42,000 satellites, raising fears of a space-junk disaster that could impede research from telescopes on earth.

According to the New York Times, scientists have been voicing their concern with SpaceX over the plan, which they predict, will wreak havoc on the field of astronomy. When the first batch of Starlink nodes launched in May this year, astronomers were alarmed at their brightness.

Jonathan McDowell, an astronomer at the Harvard-Smithsonian Center for Astrophysics says that “there is a point at which it makes ground-based astronomy impossible to do.”

Tesla is requesting permission to operate as many as 30,000 satellites on top of the 12,000 already approved. Astronomer James Lowenthal warned that “if thousands more of these satellites are launched it will look as if the whole sky is crawling with stars.” He argues that this “potentially threatens the science of astronomy itself.”

A SpaceX spokeswoman said the company was taking steps to paint the Earth-facing bases of the satellites black to minimize their reflectiveness. Dr. Tyson, chief scientist for the Large Synoptic Survey Telescope, calculates that his telescope would pick up Starlink-like objects even if they were darkened, compromising his results.

NASA Confirms It Will Be Launching Tom Cruise Into Outer Space
MoviessponsoredMay 5, 2020