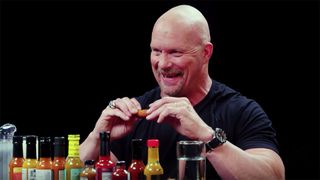 As Hot Ones is wrapping up another entertaining season, wrestling legend Stone Cold Steve Austin is welcomed to the table for this week’s finale. As you can imagine, the WWE Hall of Famer has a plethora of eye-opening stories to tell, and this is never more evident than during his time with host Sean Evans.

While putting his tastebuds to the test, Stone Cold dishes on pre-wrestling match rituals, drinking beer in the ring, and some of his fellow wrestlers, including Dwayne “The Rock” Johnson. Most notably, he also recalls the time he actually pooped himself during a match.

Stone Cold doesn’t just talk wrestling during the interview, however. He dives into being a driver’s ed teacher, creating his own beer, and his go-to margarita recipe as well.

To hear Stone Cold Steve Austin discuss his glory days — and to see how he handles the spicy wings challenge — simply press play above.

The Jonas Brothers Say John Mayer Stole One of Their Songs on ‘Hot Ones’
MusicsponsoredMay 30, 2019

DaBaby Dips His Chicken Wings in Ice Cream on ‘Hot Ones’
MusicsponsoredNovember 8, 2019
What To Read Next
Load More
Search Results
Load More