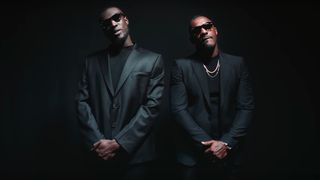 The Henry Scholfield-directed visual showcases Stormzy around his hometown of London, which opens with the UK artist spitting bars in the middle of an empty Westminster Bridge. The clip then transitions and he’s joined by a group of young dancers while rapping in front of the Bank of England.

The sequence then pans to a group of his friends and other performers as they freestyle with bikes and cars. While rapping, Stormzy invokes actor Idris Elba, saying, “Man, I’m James Bond/trying to live my movie like I’m Idris,” before Elba himself pops up next to the rapper for a cameo appearance.

Enjoy the video above and expect to see more of the rapper this summer with his own 2019 MERKY Festival.

DaBaby Taps the Jabbawockeez to Star in His Hip-Hop Musical “BOP on Broadway”
MusicsponsoredNovember 15, 2019