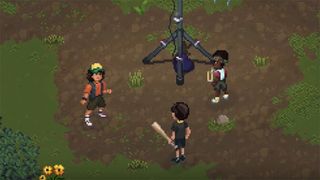 The new gameplay trailer provides a detailed look at the 12 playable characters from the game, including Stranger Things favorites Dustin, Steve, Billy, Jim and Joyce, among others. We get to see each character’s personal abilities and coinciding stats.

Complementing the season three premiere of Stranger Things, and following the same storyline, Stranger Things 3: The Game comes to PlayStation 4, Nintendo Switch, Xbox One, Mac and PC on July 4.

There’s another Stranger Things game on the way. The show’s creators Matt and Russ Duffer unveiled the trailer for the release at this year’s Game Awards on Thursday. Watch it above.

According to Variety’s report, the game is set to follow the events of the show’s upcoming third season.

As we can see from the teaser, parts of the game look set to take place within the shopping mall we saw in the show’s latest trailer. There’s also a focus on the mall’s cinema in the game trailer, which could be a hint to where some of the major action will go down in the upcoming.

The game was developed by Netflix and Bonus XP — as was the first Stranger Things game —  and together they have crafted a retro-style action-adventure RPG designed to pay homage to the 16-bit gaming era (which began in 1987, so that may be when Season 3 is set).

Stranger Things 3 game will be available to play on Xbox One, PlayStation 4, Nintendo Switch, Mac, PC, and mobile. The release date of the game is still TBC, but Stranger Things season three is slated to arrive summer 2019.

Are you hyped for another Stranger Things game? Let us know in the comments below.

In other news, HBO just dropped a teaser for ‘Game of Thrones’ Season 8.

Public Domain Explained: Here’s Why Anyone Can Collaborate With NASA
SneakerssponsoredAugust 23, 2019

Here Are All the Major Products Featured in ‘Stranger Things 3’
MoviessponsoredJuly 11, 2019
What To Read Next
Load More
Search Results
Load More