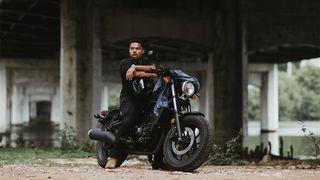 “Freedom is a combination of independence and empowerment,” explains 21-year-old artist Taylor Bennett. As we followed the Chicago rapper across the country from his hometown in the Windy City to Los Angeles, and now to Austin, Texas, we get an intimate look at how Bennett’s been able to ascend the ranks of the music industry on his own terms.

Most people know Austin for its amazing food scene yet it’s the city’s lucrative music festivals like Austin City Limits (ACL) and South by Southwest (SXSW) that are attracting top talent, and by default their fan bases, to the state of Texas.

After all, there’s a reason why Austin’s nicknamed the ‘Live Music Capital of the World’ — it’s got more live music venues per capita than anywhere else in the country.

That’s why it was the perfect opportunity for Bennett to play his first festival ever at ACL three years ago, an opportunity that helped shape his positive experience of the festival circuit which he plans on continuing. “We headlined [ACL] with Lorde, which was very, very cool,” explained Bennett. “But then I come down here every year for SXSW which is like this huge music festival. Everybody from all over the nation comes [to Austin] and they mob on Sixth Street.”

And while playing at a festival can be an unforgettable experience, Bennett says it’s much different than performing a club show in front of fans that are there specifically to see him. “When you’re at a festival there’s hundreds and thousands of people and they all paid $300 to see a couple of their favorite artists,” says Bennett. “Then there are a lot of people where they’re just kinda like stragglers and at one point they all just end up at your stage because one of their friends knows you or they just hear it and kinda like it.”

This puts extra pressure on Bennett to deliver a high energy show for revelers who’ve never heard the rapper spit before. Instead of trying to recite every bar from his songs he’d often spend that energy hyping up his newfound audience. “You don’t channel that energy the same way that you would [a headliner show] because instead of making sure that I say every single line, I have to move around more and I have to get the crowd moving, and I have to have more crowd authority,” Bennett says.

However, Bennett will be gracing fans once again as the rapper has another big headlining tour slated for either January or February next year. Constantly performing and touring can be physically and mentally taxing, and while Austin’s a musical mecca, there are plenty of natural wonders that offer respite for those seeking to recharge their creative juices. Bennett appreciates all that Austin has to offer and every once in a while he’ll get on his Honda Rebel and whisk himself away to a secluded area to get his mind off things.

“It’s things like this, coming to hang out with your friends, having a rock throwing contest and stuff like that that keeps us balanced, [but] still gives us the freedom to go the the places we wanna go,” Bennett says.

There’s a lot to see in this world, and he’s not stopping until he sees it all.

Chance the Rapper to Perform at 2020 NBA All-Star Game
MusicsponsoredDecember 20, 2019

Take a Look at the Best Shots From Firefly Festival 2019
MusicsponsoredJune 26, 2019