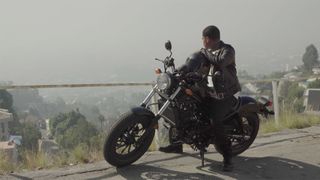 When Chicago rapper Taylor Bennett left his hometown to head west at the tender age of 18, he had no idea that Los Angeles would serve as a proving ground for the man he would grow up to become.

Having been born and raised in the Southside of Chicago, Bennett, along with his older brother Chance, will always call the Windy City his first home, but LA holds a special place in his heart, too. “It’s weird because it kinda feels like a second or third home because Chicago is my first home,” Bennett explains. “But whenever I’m here in LA, sometimes I’m only supposed to be here for three days and wind up staying a month.”

There’s a good reason why Bennett likes to overstay his welcome; the city is full of chill vibes and filled with other hustlers and go-getters just like him looking to chase big dreams and even bigger success. “When I’m going out to LA, I’m going out to work, I’m going out to make music, but I’m also going out there to have a great time,” Bennett admits.

And he sure is working a lot. Bennett’s west coast surroundings affords him new inspirations to draw from, especially as he’s working on material for his new album. The creative scene out there is going through a renaissance of sorts and Bennett is looking to capitalize on all of it. “Before I even knew the title [of my new album] I knew I wanted to be in LA,” Bennett says. “I wanted to be away from all the things I was used to so I could really get down to make the music that I want to make.”

Not only is he working on a new material, but he’s also got a lot on his plate in terms of output as well as having signed a new artist to his record label. “We’re probably gonna go back on tour, we’re putting out some new merchandise, and Bianca Shaw just got signed to the label so she’s working on her project,” says Bennett.

Although moving to a new city can be a bit lonely at times, he actually enjoys that time by himself—whenever he can get it. It allows him to clear his mind to think, plan, and ultimately create. With all the noise in the world it’s important to find an outlet to do this, and for Bennett getting on his bike and cruising the California hills gives him this peace of mind. “I’m loving these LA vibes, it never rains which is motivating for my riding,” Bennett explains. “This new Rebel is the perfect ride when I’m looking to connect with the road and work out some new ideas.”

For Bennett, the road to success is only a short ride away, no matter what city he’s in.