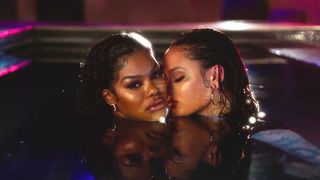 Teyana Taylor has teamed up with fellow R&B queen Kehlani for a dreamy new track “Morning.” Taylor dropped a self-directed steamy video to accompany the new music, watch it above.

In the video the two singers star as love interests. The visual, much like the song, is very sensual and shows Taylor and Kehlani crooning in a dark room before getting cozy in a pool. The song is expected to appear on Taylor’s upcoming third studio album, simply titled The Album. The project, which as yet does not have a release date, will be released via G.O.O.D. Music/Def Jam Recordings.

This is not Teyana Taylor’s first venture into directing. As well as directing several of her own music videos, the artist recently went behind the camera for Megan Thee Stallion’s Hottieween YouTube series.

Kehlani Stakes a Claim to Her Man on New Track “All Me” ft. Keyshia Cole
MusicsponsoredDecember 23, 2019