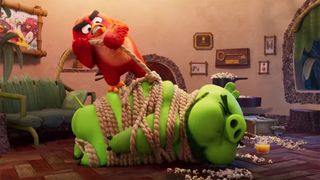 Sony Pictures Entertainment has just shared the new international trailer for The Angry Birds Movie 2, ahead of the film’s summer premiere.

Flightless birds and green pigs may have been at each other’s throats in The Angry Birds Movie, but as a new threat arrives on Bird and Pig Island, the two species must join forces before their lands are overtaken. Red (played by Jason Sudeikis), along with Chuck (Josh Gad), Bomb (Danny McBride), and Mighty Eagle (Peter Dinklage, then decide to reach out to Chuck’s sister Silver (Rachel Bloom), while teaming up with pigs Leonard (Bill Hader), Courtney (Awkwafina) and Garry (Sterling K. Brown) to align birds and pigs against a common enemy, played by Leslie Jones.

Press play above to watch the hilarious new trailer for The Angry Birds Movie 2 before the movie comes to theaters on August 16.