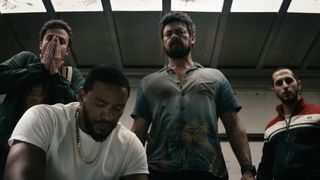 While the Avengers gear up to save the world in Endgame, the superhero’s in Amazon Prime’s The Boys are destroying it for their ego and personal gain. In a new NSFW trailer, we get an interesting look at superheroes who are actually terrible people.

With over-the-top level of sex and violence, Seth Rogen and Evan Goldberg’s upcoming TV series shows a wild take on what happens when superheroes, who are as popular as celebrities, as influential as politicians and as revered as Gods, abuse their superpowers rather than use them for good. A group of individuals called “the boys” embark on a heroic quest to expose the truth about “The Seven (the corrupt group of superheroes)” and to simply “spank the bastards.”

The Boys premieres July 26 on Amazon Prime Video later this year. Learn how to spank superheroes in trailer above.