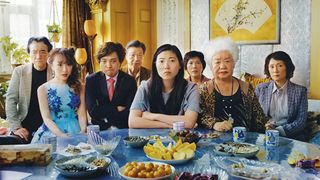 Following appearances in Ocean’s 8 and Crazy Rich Asians, 29-year-old rapper and actress Awkwafina has landed her first leading role in Lulu Wang’s feature film directorial debut, The Farewell. The movie received rave reviews at Sundance earlier this year, as we now have the official trailer courtesy of A24.

We got us a poster. #TheFarewellMovie trailer dropping today and I’m very excited. @A24 @thumbelulu pic.twitter.com/Mq30bwX5SN

In The Farewell, Awkwafina stars as Billi, a Chinese-American woman who takes a trip to China to attend a family member’s wedding. There’s only one problem. There is no wedding, as it’s all a lie to get the family together one last time before their grandmother, Nai-Nai, passes away. Aside from Billi, everyone agrees that it’s best for Nai-Nai not to be made aware of the lie. This ultimately sets in motion a journey of self discovery and family bonding that Billi was not expecting.

Tzi Ma, Diana Lin, Chen Han, and Zhao Shuzhen feature alongside Awkwafina in The Farewell, which comes to theaters July 12.

In other news, Victor Cruz stops by The Dropcast to talk sneakers and his new collaboration. Check below.

Matthew McConaughey Is a Marijuana Kingpin in Guy Ritchie’s Star-Studded ‘The Gentlemen’
MoviessponsoredOctober 2, 2019