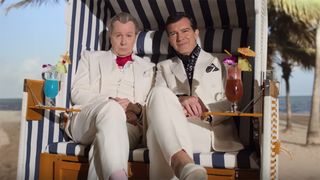 Academy Award winner Gary Oldman and Golden Globe nominee Antonio Banderas star alongside Academy Award winner Meryl Streep in Steven Soderbergh’s new Netflix film, The Laundromat. With the movie due out in theaters next month, and on Netflix in October, today we showcase the official trailer for the picture.

The Laundromat is adapted from “Secrecy World” by Pulitzer Prize-winning investigative reporter Jake Bernstein, detailing the story of two Panama City law partners, Jürgen Mossack (Oldman) and Ramón Fonseca (Banderas), who exploit the world’s financial system. In short, Mossack and Fonseca help the rich and powerful stay that way by utilizing shell companies and offshore accounts. Everything seems to be going well for the law partners until Meryl Streep’s Ellen Martin gets wind of their tax evasion and bribery.

Jeffrey Wright, Robert Patrick, David Schwimmer, and Sharon Stone also feature in The Laundromat, which is directed by Academy Award winner Steven Soderbergh from a screenplay by Scott Z. Burns. The movie releases in theaters September 27 before coming to Netflix October 18.

Sponsored Story
18 East’s Antonio Ciongoli Explains How to Run an Independent Label on ‘The Dropcast’
UncategorizedsponsoredJuly 26, 2019