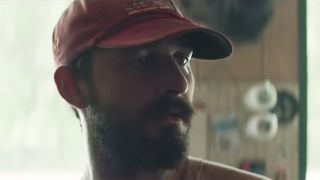 Today we receive the first trailer for Shia LaBeouf‘s new movie, The Peanut Butter Falcon. Written and directed by newcomers Tyler Nilson and Michael Schwartz, the film centers around a small time outlaw (LaBeouf) who forms an unlikely bond with a boy with Down syndrome (Zack Gottsagen).

LaBeouf’s Tyler and Gottsagen’s Zak wind up on the road together after Zak runs away from a residential nursing home to pursue his dream of becoming a wrestler. Tyler ultimately decides to help Zak get to the professional wrestling school of his idol, The Salt Water Redneck (Thomas Haden Church). Along the way, the two convince a caring nursing home employee by the name of Eleanor (Dakota Johnson) to join them on their journey.

Pegged as a modern take on a Mark Twain adventure, The Peanut Butter Falcon won the Narrative Spotlight audience award at this year’s SXSW Film Festival. You can catch the movie in theaters August 9.

How to Wear the Nike x Ben & Jerrys “Chunky Dunky”
SneakerssponsoredMay 23, 2020
We Recommend

Shia LaBeouf Is Hosting a Birthday Fundraiser With a ”Better Lineup Than Coachella”
MusicsponsoredJune 16, 2019

Peanut Butter Brand Jif Settles the “GIF” Pronunciation Debate Once and For All
FoodsponsoredFebruary 26, 2020

Watch Shia LaBeouf Explain Why Kanye West Took All of His Clothes
MusicsponsoredJuly 3, 2019