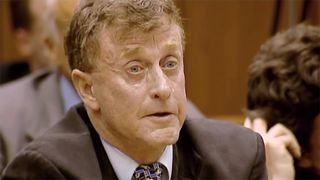 Netflix has secured the rights and unveiled the trailer for an expanded version of French director Jean-Xavier de Lestrade’s 2004 docuseries, The Staircase. The true crime series focuses on novelist Michael Peterson, who was charged with and convicted of the murder of his wife Kathleen after she was found dead at the bottom of the staircase in their home in 2001.

The Staircase originally aired in 2004 when Academy Award winner De Lestrade was given access to the case and built his series around Peterson’s battle to clear his name in court. Now, with Peterson released in 2011 after revelations of misleading information being used during the original case, Netflix will stream the entire original 2004 series, 2013 sequel The Staircase II: The Last Chance, along with three brand new episodes.

The Staircase follows in the footsteps of popular Netflix true crime docuseries such as Wild Wild Country, Making a Murderer, and Evil Genius: The True Story of America’ s Most Diabolical Bank Heist.

The 13-episode show will be available to stream starting June 8. Watch the trailer above and leave your thoughts in the comments.

In other news, Kanye’s “Super Moon Yellow” YEEZY 500 Desert Rats are dropping soon. Find out how to cop them here.

‘Stranger Things’ Is Coming to ‘Dead by Daylight’ Next Month
MoviessponsoredAugust 20, 2019
What To Read Next
Load More
Search Results
Load More