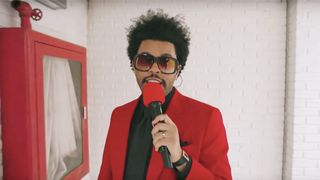 The Weeknd is causing quite a lot of hype at the moment. Not long after the artist sent Twitter into a frenzy over the release of his new track, “Heartless,” he was mobbed by excited fans outside The Late Show With Stephen Colbert studios in New York City.

His appearance on Colbert was to perform the new track, a moment that saw him forgo the typical stage display and instead deliver a trippy behind-the-scenes tour of the Ed Sullivan Theater studios, where The Late Show is filmed. Watch his performance in full in the video up top.

Upon leaving the studio, however, The Weeknd was literally swarmed by fans — a moment that TMZ caught on camera. Watch below.

The Weeknd Earns His Fourth Hot 100 No. 1 With “Heartless”
MusicsponsoredDecember 10, 2019