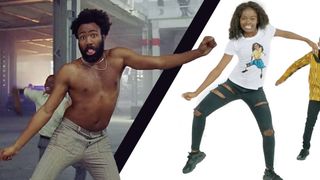 Sherrie Silver, the choreographer for Childish Gambino’s “This is America” music video, has dropped a dance tutorial demonstrating the moves performed by Donald Glover and the video’s backing dancers. In the clip, Silver explains her promise to share a how-to as soon as the video reached 100 million views on YouTube (it’s currently on 126 million views and counting).

With help from a pair of young assistants, Silver walks us through Childish Gambino’s transfixing dances step by step. Speaking to Glamour, 23-year-old Rwandan Silver explained that she wanted to mix choreography from across Africa with homegrown American dances.

“I basically wanted to bring my authentic style from different parts of Africa — not just my country — because I felt that it was very important to represent a lot of the continent. With the song being called “This is America,” I wanted to make sure that there were some American references as well. That’s why you got dances in there like the Shoot and the Reverse and the Nene. And, obviously, Donald added his own style of movement.”

Watch the video above, have a go at some of Silver’s moves, and let us know how it went in the comments below.

In other news, this video breaks down the lyrics to “This Is America.”

Black Lives Matter
Why Police Unions Have So Much Power In America
LifestylesponsoredJune 9, 2020
Follow
Highsnobiety Music
What To Read Next
Load More
Search Results
Load More