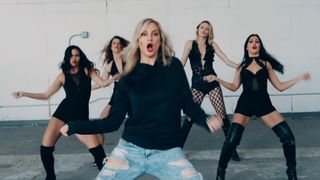 Since Childish Gambino dropped the video to latest single, “This Is America,” fans, peers, and commentators have been buzzing about the politically charged clip, furthering the conversation around hot-button topics in the U.S. today. Now, however, it seems that others are looking to benefit from Gambino’s masterpiece by switching the narrative.

Nicole Arbour, a former Toronto Raptors cheerleader and self-proclaimed comedian, released her own take on the video, the “This Is America: Women’s Edit,” a few days ago. The rework finds Arbour rapping about beauty standards, the gender pay gap, and rape, among other topics. Not only have Gambino’s lyrics been switched out, but the carefully considered dance moves are traded for twerking and tap dancing.

While Gambino’s “This Is America” comments on how easily we can become distracted from the horrors of racism and inequality, parodies such as the “Women’s Edit” appear to make Gambino’s point for him. As such, fans of the original video took to Twitter to vent their frustrations.

Are we really surprised that Nicole Arbour gentrified This Is America? I mean, she tweets stuff like this. pic.twitter.com/x3xFmlNgN8

Nicole Arbour's "This is America" parody is proof white people think black pain & oppression is funny. They're constantly joking about things they dont experience because they lack empathy. They laugh at our pain & deny our oppression, while stealin our culture for money. #Evil

how fitting that "this is america: [white] women's edit" almost exclusively depicts black and brown men as its male aggressors pic.twitter.com/RLMuQxPdkX

That women edit of #ThisIsAmerica is fking insulting. And the sad part is, that they are doing exactly what Gambino talking about. Taking Black struggle, or in this case, a piece that strives to showcase black struggle and make it about something else.

I'm sorry, but absolutely not. Get out of here with this mess. We seriously can't have anything or take anything seriously. Stop aligning Black plight with white feminism. Stop cheapening black art and creativity. Just stop.

This Is America: Women's Edit https://t.co/nTtbj1ijOg

Arbour has now issued an official response to the backlash. In a note posted to Twitter, she wrote that the video was “a tongue in cheek way to give additional glory to what I believe is the most impactful piece of art in recent years,” and that it “was created with every intention of bringing a light to women’s experiences.”

She adds: “Due to the sensitive nature of the original, I understand why some people are wrongly portraying this as white vs black,” but also encourages others to “create their own version of this video.”

This isn’t the first time Arbour has come under criticism. Back in 2015, she released the fat-shaming video “Dear Fat People,” which she later admitted on The View, “was made to offend people.”

A message about the misinterpretation of my #ThisIsAmerica Women’s Edit… pic.twitter.com/tRH0McxzD1

For more on “This Is America,” the song’s lyrics are explained here.

Now, be sure to get a look at “This Is America” director Hiro Murai’s best music videos.

Drew Brees Responds to Trump: “This Is Not About the American Flag”
LifestylesponsoredJune 4, 2020
Follow
Highsnobiety Music
What To Read Next
Load More
Search Results
Load More