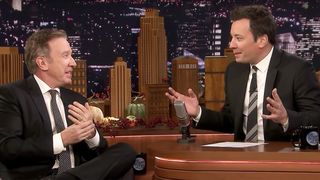 Tim Allen — a.k.a the voice of Buzz Lightyear — arrived on The Tonight Show Starring Jimmy Fallon yesterday to drop a hint about the ending of Toy Story 4, and it’s got us more hyped than we were already.

Describing the ending as a “Scarlet, I don’t give a damn moment” (referencing and ad-libing Gone with the Wind‘s famous dramatics), Allen stated that the finale had really kicked him in the feels. “The last scene of that movie, I couldn’t even get through it. I had to turn around,” he told Fallon. “It was so emotional.”

Allen then goes on to mock his own character, summarizing that all Buzz does is yell “Woody” in different tones throughout — which, to be fair, based on the previous three movies, is kind of true.

Are you excited for Toy Story 4? Share your thoughts in the comments.

In other news, you can stream every ‘Game of Thrones’ episode for free this Thanksgiving.

This ‘Toy Story’ Supercut Is an Epic Trip Down Memory Lane
MoviessponsoredJune 27, 2019