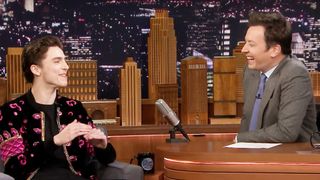 On last night’s The Tonight Show Starring Jimmy Fallon, Timothée Chalamet bounced between a number of topics, from what it was like being at the Oscars while his mom and sister were fighting, to where he keeps his awards (next to his taekwondo trophies, of course). The best part of his chat with Fallon, though, was his reaction to the Instagram meme account that puts him into classic works of art.

A Young Man with a Basket of Fruit (Personification of 'Summer'), 1640 by Bartolomé Esteban Murillo #chalametinart #timotheechalamet

The account is called @chalametinart, and we spoke to its creator back in July. Transferring Chalamet’s visage into iconic works such as Michelangelo’s David, Grant Wood’s American Gothic, and Botticelli’s The Birth of Venus, account owner Anna is something of a Photoshop wizard. And now she has a message of thanks from the man himself.

When asked by Fallon what he thinks of the account, the 22-year-old Call Me by Your Name actor said, “That is so weird. But it’s cool. And I’m grateful for whoever it is who’s doing that. Thank you,” before adding, “I can’t do Photoshop for shit.”

Do you have a favorite Chalamet movie (or artwork)? If so, let us know below.

Now, read our conversation with Anna, the creator of @chalametinart.