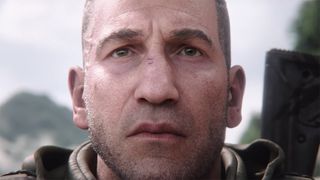 The Punisher may be canceled, but Jon Bernthal is taking his military expertise to a different industry, starring as the lead villain in Tom Clancy’s Ghost Recon Breakpoint.

Tom Clancy’s Ghost Recon Breakpoint is a military shooter game set in a mysterious and hostile open world. You can play solo or in a four-player co-op, as you — a Ghost, an elite spec ops soldier — must fight to survive all while being lost in Auroa. Now, however, you are put to the ultimate test by going to battle against your toughest enemy yet, your own brothers-in-arms. Your odds of survival will increase as you choose the right alliances to defeat a common enemy.

Again, Ubisoft has tapped 42-year-old badass Jon Bernthal to star in Tom Clancy’s Ghost Recon Breakpoint. In speaking on Bernthal’s appointment, the games creative director, Eric Couzian, explained, “Because of the TV show we saw with Jon, his background with military universes, his personality. He’s not a trope character, even though he’s the bad guy. You will understand his motivation and it’s interesting to see how he used to view the Ghosts and drifted slowly. You feel that there’s a conflict deep within him.”

Press play above to get a first look at Jon Bernthal’s Cole D. Walker in Tom Clancy’s Ghost Recon Breakpoint, which comes to PS4, Xbox One, and PC on October 4.

On this week’s episode of The Dropcast, we are joined by Iddris Sandu — architect and technology advocate who has worked with Nipsey Hussle on co-creating the late artist’s smart-retail platform at Marathon and put his time in at Google at the age of 13, among other accolades.