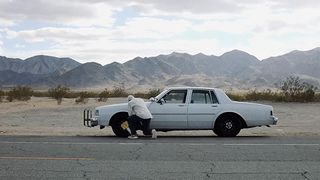 A teaser for the movie was posted on the NikeCraft website last week, giving sneakerheads a first look at the Mars Yard Overshoe. Now sneakerheads and Sachs fans alike can watch the 23-minute film in full and see the shoe in action.

Paradox Bullets stars Ed Ruscha in the leading role, with the dulcet tones of German film legend Werner Herzog providing the narration. Sachs himself also plays a part in the short. The film’s score is by Grey Gersten and the film is co-written and directed by regular Sachs collaborator Van Neistat.

The short follows a man who loses his keys in the Mojave Desert and has nine bullets to get him home.

The NikeCraft x Tom Sachs Mars Yard Overshoe was released at Dover Street Market in London on October 11, with a wider global release planned in the coming months. Watch Paradox Bullets above and stay tuned for further updates regarding the shoe’s release.

Next, check out our interview with Sachs and watch him unbox his sneakers for the very first time here.