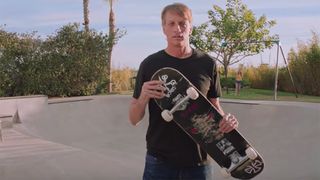 Legendary skateboarder Tony Hawk is the latest celebrity to participate in Vogue’s rapid-fire 73 Questions segment. The publication ventured out to Hawk’s San Diego home to get a look at his property, all while bombarding him with question after question.

Thanks to @voguemagazine for including me in their prestigious #73questions series (link in bio). And special thanks to @sarahhallprinc for setting it all up! Yes, I’m still here.

During the interview, Tony dishes on what got him into skating and his first memories of the sport. He insists that he was not a natural skater, while showing off his early skateboards, including his first pro model and a replica of his first-ever board.

From there, Hawk discusses how his life changed dramatically once his first video game released. He goes on to rate his gaming skills and reveal which character he plays with.

Elsewhere in the interview, Hawk touches on his personal style, his new fashion line, the rise of female skaters, and skateboarding becoming an Olympic sport. To learn more about the iconic athlete, simply press play above.

Deaton Chris Anthony Gets the Man Himself for His “Tony Hawk” Video
MusicsponsoredOctober 23, 2019