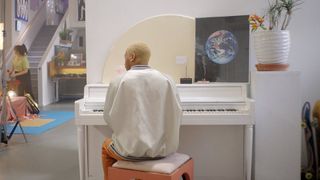 Toro y Moi revived the spirit of disco through his Outer Peace album, but he’s far from finished with spreading the good vibes. After surprise dropping the Soul Trash mixtape a few weeks ago, the producer now shares a visual for his single “Ordinary Pleasure.”

In our review of the record, we mentioned how there’s a sense of light despair beneath the playful nature of the track, but the accompanying visual transports viewers deeper into the reality of Toro y Moi’s vibrant world as Chaz Bear gives us a personal tour of the Company Records studio. All of the creative energy hosted in the space is practically contagious and it’s certainly more stimulating than any office that we’ve ever stepped foot in.

For more on Toro y Moi, revisit our fashion editorial about how he found a new sense of we in DIY. Watch the entire video above and scroll down for a full list of upcoming tour dates.

Highsnobiety Premiere
Jadagrace’s “Bounce” Is Almost Too Much of a Vibe
MusicsponsoredNovember 19, 2019

Future Is Living It Up in the South of France in NSFW “Please Tell Me” Video
MusicsponsoredAugust 13, 2019
Follow
Highsnobiety Music
What To Read Next
Load More
Search Results
Load More