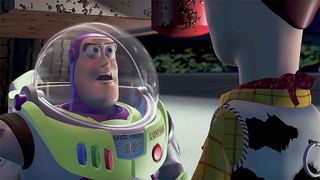 If you aren’t one of the many who helped Toy Story 4 score the franchise’s largest-ever domestic opening at the box office last weekend, the nostalgic recap video above will make you want to hit the theater immediately.

Titled Toy Story 4 Ever, the three-minute clip is an epic supercut of the now 24-year-old saga, kicking off with reintroductions to the main Toy Story crew: Woody, Buzz, Jessie, Rex, and the gang. The video moves through pivotal moments such as Woody and Buzz’s first meeting right through to Forky’s arrival in Toy Story 4. It should go without saying that it’s a nostalgia-laden treat.

The video comes courtesy of Lou’s Cafe, aka Topher Grace’s side project, and has been shared by Pixar itself, giving it the official stamp of approval.