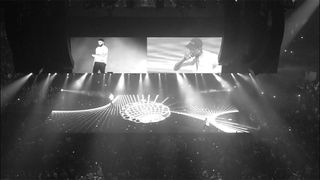 Drake‘s ‘Aubrey & The Three Amigos’ tour took over Toronto back on August 21, as the 6 God blessed the sold-out crowd with a surprise guest in Travis Scott. Together on stage, the two performed Travis’ Astroworld standout, “Sicko Mode,” for the first time alongside one another.

And while we previously got a look at the show via fan footage, Scott has today unleashed an official live video of the performance.

After watching the clip, see underneath to revisit Astroworld.

In other news, Drake has clapped back at Kanye over his “purple demon emoji” comments.