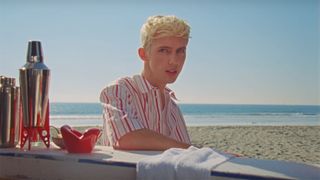 Troye Sivan shares his new video for “Lucky Strike” today, directed by Emma Westenberg, who is also responsible for Janelle Monáe’s Grammy-nominated video “Pynk.” The visual finds Troye on the beach, smitten with a local bartender.

With the help of YouTube, Sivan premiered his new video in unique fashion by utilizing the YouTube Premiere Page chat to connect with his fans as they watched the clip for the first time.

To further complement “Lucky Strike,” Troye and Emma worked with Dropbox to create two short films documenting the making of the video, also including behind-the-scenes footage and candid interviews. The first film will release on January 14 at dropbox.com/troye-and-emma, followed by the second on January 16.

“Lucky Strike” is taken from Sivan’s sophomore album, Bloom, which you can stream below. Also, you can catch the South African-born entertainer on tour in Europe, the UK and Asia this year.