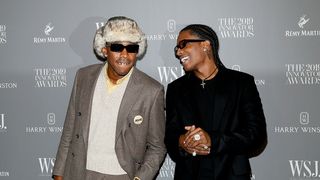 This week Wall Street Journal honored Tyler, the Creator with the 2019 Music Innovator Award, capping off a big year for the artist. The rapper received the accolade Wednesday night at WSJ’s annual event, which was held at the Museum of Modern Art in New York City. To do the honors, the magazine invited none other than A$AP Rocky to present the award to close friend.

During his opening remarks, Rocky was quick to roast his buddy. “It’s an honor to present this award to my best friend today, but little do y’all know I hate that motherfucker”,” he began. “So I’ma try to figure out a few kind words to say about him.” However, Rocky swiftly digressed to praise his friend, calling him “one of my inspirations.”  “People don’t know this, but when we came into the rap game we didn’t even like each other, our crews didn’t like each other.” The rapper also noted Tyler’s innovations in “comedy, culture, television, entertainment, music, style.”

For his part, Tyler humbly accepted the award after a lengthy hug with Rocky. “My whole life I’ve felt like a stepchild—in school, at home, and especially in music and rap where I have a profession […] But Wall Street Journal finally made it feel like that family celebrated my birthday,” Tyler explained during his speech. “So thank you.” Watch the touching moment above.

Tyler, the Creator later reflected on the moment and his friendship with Rocky in an emotional Instagram post, writing “I appreciate you and everyone else that was there.”

WALL STREET JOURNAL AWARDED ME WITH MUSIC INNOVATOR OF THE YEAR. MAN, THANK YOU! AND RAKIM, MY GUY! WE USED TO HATE EACH OTHER AND I HAVE TO SAY YOU CHANGED THE COURSE OF MY SHIT AS SOON AS WE REALIZED THAT WAS STUPID. THANK YOU MAN, NIGGAS LEVELED UP BIG TIME! I APPRECIATE YOU, AND EVERYONE ELSE THAT WAS THERE, 🤗🤗🤗: @msmelina @cindysherman @riccardotisci17 @wsj @wsjmag @asaprocky @imaanhammam ( im forget people)