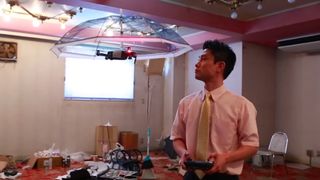 Real gentlemen hold the umbrella for their significant other. But that may not be necessary for much longer, thanks to Free Parasol. Free Parasol is essentially an umbrella drone, allowing you to keep both hands free and your head dry.

The drone is connected to a 59-inch umbrella, thus being equipped with AI software that detects the top of your head and remains positioned above it. The prototype in the on-hand visual weighs in at roughly 11 pounds and is capable of hovering for about 20 minutes on a single charge. However, Asahi Power Service plans to shed weight down to two pounds and lengthen flight time to one hour.

In addition, the drone’s propellers serve as a fan, providing cool air below on warmer days.

Due to laws regulating where drones can fly, Asahi Power Service will initially begin selling the umbrella drone solely in private areas such as upscale golf courses. The innovative device is expected to retail for approximately $275 USD and is due out next year.

Timothée Chalamet Shows Everyone How Tailoring Is Done in 2019 at Venice Film Festival
StylesponsoredSeptember 3, 2019

Here’s Your Chance to Win a Year’s Supply of Free Sneakers This Weekend
SelectssponsoredNovember 22, 2018

Kicks Under Retail & a Chance to Win Free Sneakers for a Year? Why Not
SelectssponsoredNovember 30, 2019
Follow
Highsnobiety Design
What To Read Next
Load More
Search Results
Load More