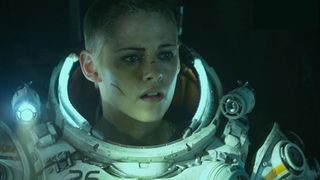 Underwater centers around a crew of underwater researchers attempting to reach safety after an earthquake destroys their subterranean laboratory. At first, Norah Price (Stewart) and company are merely worried about their damaged machinery and dwindling oxygen supply, but they soon learn there is much more to be mindful of, specifically deep sea monsters that seemingly feast on human flesh.

Press play above for a glimpse at what to expect from Underwater, which lands in theaters January 10, 2020.